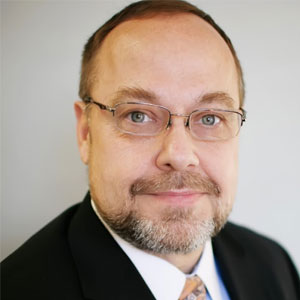 The imaging industry is an interesting paradox for many CIO’s. First those ubiquitous devices that print, copy, fax, and scan documents are not sexy or glamorous compared to cloud, big data, or other major IT initiatives. Most CIO’s don’t get excited about managing “print projects” or taking over management of copier devices. However, they also know that when printers don’t work, when copiers jam, or when users aren’t satisfied with the imaging environment it can hamper user productivity. It also results in IT support center calls, and can often escalate to significant internal customer satisfaction issues.

Beginning in the mid 1990s, imaging vendors such as HP, Xerox, and Lexmark began changing the traditional imaging industry business model. For several years the copier and printer market had been on a collision course as new multifunction devices (MFD’s) or printers with copy, scan and fax capabilities bridged the divide between the printer and copier domains. The printer domain was controlled by IT decision makers and dominated by firms such as HP, Lexmark, and Dell. The copier domain was driven by decision makers within the office administration and purchasing functions and dominated by equipment vendors such as Xerox, Ricoh, Konica Minolta, and Canon.

​Expectations are increasing, and vendors are being forced to push the evolution of their MPS programs to deliver enhanced and value added services

These new products were attached to the network, extremely intelligent with embedded storage and technology for remote monitoring of usage, service needs, and other vital statistics. By 2006, the printer and ‘copier’ markets had essentially converged from a product and technology standpoint into products with similar core technologies and capabilities. Sure, copiers were still primarily A3 (capable of printing on 11 X 17 paper) capable products and multifunction printer products were primarily A4 (capable of printing on 8 ½ X 11” paper), however most the printer and copier devices were similarly connected, capable of printing, scanning, faxing, and copying, and, able to be managed remotely.

As the core imaging product technology converged, the market really began to transition when several leading firms – notably HP, Lexmark, and Xerox began offering something called Managed Print Services or MPS. The concept was pretty straightforward. Instead of selling printers or MFD’s, these vendors would provide the customer with products to use, and charge based on usage. Now while this practice was borrowed from the copier industry, namely charging for use versus selling the customer a device and letting them buy the supplies, it had a much broader concept. The idea behind MPS was to ‘manage the customer’s environment’ including taking ownership of the existing printer fleet, optimizing the deployment of devices to ensure maximum usage while meeting internal requirements, and then bill the customer for usage. This concept of ‘managing the imaging fleet’ was a significant step beyond the cost per copy or ‘click charge’ contracts offered by copier vendors. It shifted the management risk to the vendor, while giving a single vendor control of a major portion, or the entire printer fleet within a customer’s business.

This trend represented a fundamental business model shift for manufacturers and resellers. It required the development of new capabilities to manage and monitor fleets, consultative sales processes and operational capabilities to convince customers to hand over the management of the print and most importantly, deliver on the contract. The market has seen dramatic growth with most firms in the industry offering some form of MPS. There are nowmany independent software firms such as PrintFleet, PrintAudit, and FMAudit that offer tools to remotely managing these devices, and over 30 major MPS ‘programs’ that were introduced between 2008 and 2010. Today, the MPS market represents over 27 percent of the entire imaging market revenue. 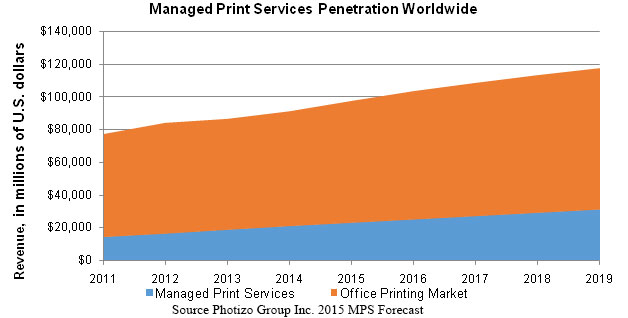 As the market has grown, MPS offerings have evolved from managing devices and optimizing the fleet deployment (what we call Stage 1 and Stage 2 MPS), to focus on business process transformation. This includes workflow redesign and workflow tools to outsourcing workflows (think DotLoop’s cloud / seat license based usage model for document approval systems).We call this new level of MPS Advanced Document Services (ADS).

So clearly MPS has had an impact on the market. But what about the customer? Has MPS driven clear benefits to make it worth the significant work associated with shifting to this new model for procuring imaging capabilities? The short answer is yes.

Research by Photizo Group of organizations that have implemented MPS demonstrates the significant savings associated with how MPS can improve the business model. This includes reducing the average printing costs in an unmanaged environment by over 30 percent. It also reduced the level of support required and even driven down the carbon impact of imaging by as much as 33 percent. A number of global enterprises such as Dow Chemical and Merc have shown massive savings as their printer fleets have been right-sized and the responsibility for managing and on-going optimization has shifted to the third party vendor.

And the evolution continues. The imaging market has over one hundred million intelligent devices installed and connected, with over 30 percent of these devices actively monitored and in many cases managed. Therefore, the imaging market has become one of the largest industrial Internet of Things (IoT) community in the world. As a result, the rush is on to find ways to leverage advanced analytics techniques such as predictive analytics to optimize vendor’s services operations by accurately predicting device needs months in advance. The analytics can determine which devices will fail, when they will fail, and what components on the devices will fail.

Customers requirements and expectations are also evolving. Photizo Group’s MPS Decision Maker Tracking Study, an on-going study of CIO’s perceptions regarding print service contracts, satisfaction levels with existing vendors, and plans for contract renewal, has found customers are beginning to switch vendors and in some cases bring the MPS programs back under in-house management. Specifically, the 2015 study of over 1,000 MPS decision makers identified that over 33 percent of the respondents are switching vendors or bringing MPS back in house. The main drivers are the expectations of users regarding vendor performance, difficulty of working with some vendors, and internal customer dissatisfaction.

So while MPS has clearly shown some very impressive and significant advances and positive impact for customers, expectations are increasing, and vendors are being forced to push the evolution of their MPS programs to deliver enhanced and value-added services. MPS is clearly evolving the industry, and in our opinion, the evolution is just beginning. So what do you think? Is MPS changing your organization’s approach to business?

Digital Transformation and technological advancements in a NEO Bank

The Bank's Experience: How a Company's Use of Fintech Can Accelerate...

Fintech solutions for the exploding savings market: How banks can...

Looking to Finance a Tech Startup? Your Timing May Be Just Right